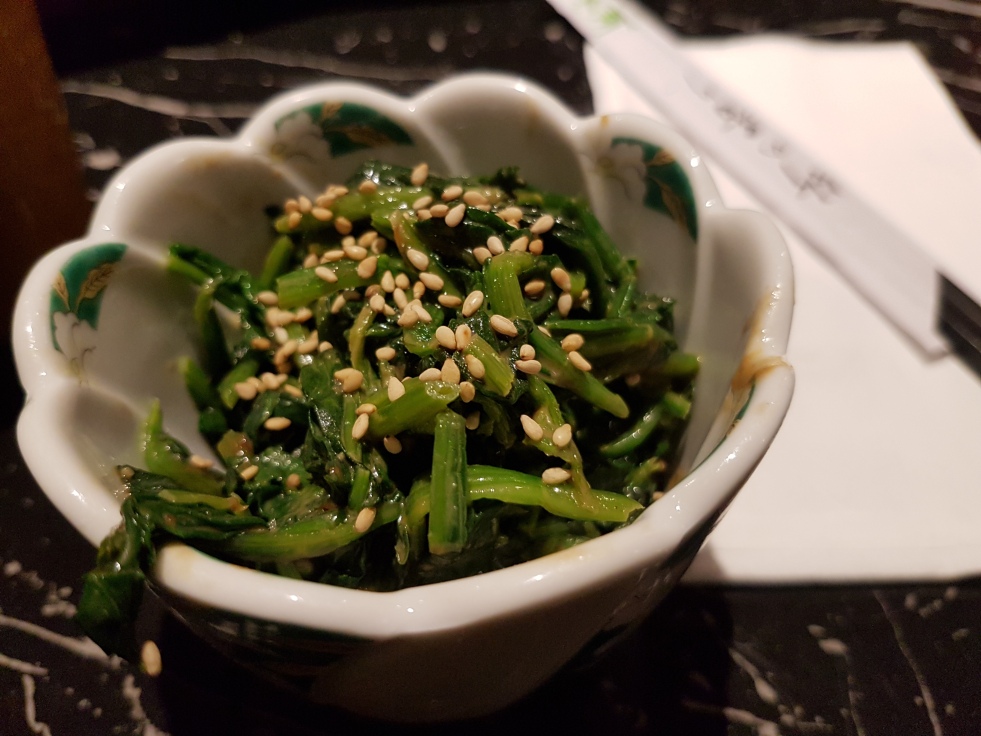 There’s spinach and then there’s Gomae! This is a Japanese style spinach salad dressed with sesame seeds. You start by toasting the sesame seeds in a pan until some seeds start to pop. Then you grind the seeds using a mortar and pestle but leaving some seeds unground because it adds texture.

Add some soy sauce, sugar, sake and mirin to the ground seeds and mix.  Now, Japanese spinach leaves are a bit tougher than the Western kind so they add the spinach to some hot water and leave it for about 30-40 seconds. It is then soaked in cold water to stop the cooking. The spinach is squeezed to drain all the water from it. And then the sesame seed mixture is added to the spinach and tossed. The result is a heavenly mix of texture and taste.

I love this Japanese dish and I like to order it whenever I go out for sushi. It is not as popular as sushi itself but it definitely deserves some accolade. I always thought the nutty taste was peanut butter but it was only after I did my research on how it was prepared, that I found out how misleading my palette was. It is definitely a fun take on spinach and most people can have this dish including people on a vegan or paleo diet. I think it is also a good start for people who are not too keen on greens. It is sweet, chewy and crunchy just like most candy bars! Wink

But just like all foods, some restaurants do not do a good job at preparing Gomae well and it is always a disappointment when you’ve been craving a particular food for a while and you don’t quite get the experience you longed for when you finally get to eat it. Sigh.

I have to learn how to make Gomae and hopefully I find the courage to attempt it soon!

View all posts by anitaegejuru